The Securities and Exchange Commission released proposed rules that would implement Title V and VI of the Jumpstart Our Business Startup Act. The Commission proposes amendments that would revise the rules adopted under Section 12(g) of the Securities Exchange Act of 1934 (the “Exchange Act”) to reflect the new, higher thresholds for registration, termination of registration and suspension of reporting that were set forth in the JOBS Act. The proposed rules would also apply the thresholds specified for banks and bank holding companies.

What’s next: Public Comment Period (comments should be received on or before February 18, 2015). 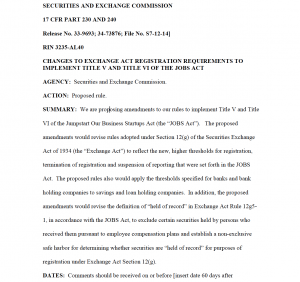